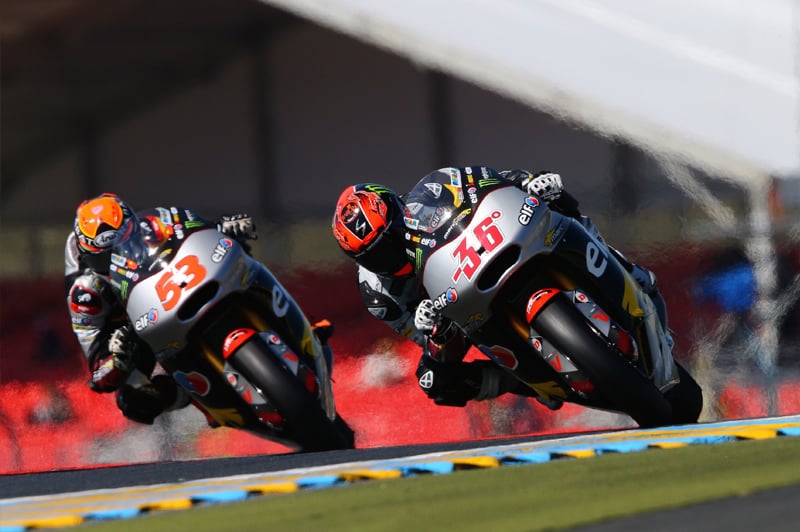 Marc VDS win 5 out of 6 GPs this season

Zircotec’s technical partners in Grand Prix motorcycle racing are the Belgium based Marc VDS Racing team. With the season about one third completed the team have won five out of the first six rounds of the Moto2 series and are having their most successful season ever.

The team runs two riders in the ultra competitive Moto2 series, Esteve Rabat and Mika Kallio who are currently sitting comfortably in first and second in the World Championship respectively.

Rabat has won three GPs this season so far whilst teammate Kallio is himself no slouch with two victories to his name so far. They have also both managed to maintain that uncanny knack of when not winning, to either finish on the podium or as close to it as possible. That consistency has seen Rabat collect 124 points so far and Kallio 102 with their nearest rival only sitting on 69 points.

For the last couple of years the Moto2 class has used a control engine instead of it being a prototype class as had been up until that point. The change in the regs came about as the FIM the World controlling body for motorcycle racing, the teams and the manufacturers all tried to come up with a solution to reduce the costs involved. The objective was to encourage more teams to enter the class and that has certainly succeeded with the grids now regularly completely full with over 30 machines taking part.

The control engine is an in-line four stroke four cylinder configuration with the cylinders arranged laterally across the frame of the machines. The power plants are all manufactured by Honda and are loosely based upon their CBR600RR engine. With the advent of the control engine every last scrap of power became so much more important and yet even more elusive for the engineers. This is why Marc VDS came to Zircotec to discuss how our ceramic coatings could help them squeeze just that little bit extra out of the motors because as all race engineers know, it’s all about gaining that edge.

We are proud to say we have contributed to the team’s success by providing ceramic coatings using our Performance White formulation on their manifolds and downtubes. We have been working closely with the team for the last couple of seasons. Our collaboration with Marc VDS has directly contributed to our research into ceramic coating applications for motorcycles and resulted in the Endurance Range.

The 2013 season’s results were tremendous and in fact winning the World Championship was a real possibility until British rider Scott Redding crashed and broke his wrist with three rounds to go whilst leading the series. This year with both riders doing so well everyone is very positive about the future. Of course there is still two thirds of the season to go and anything can happen in racing but no one can deny the first part of the season has been a spectacular success.

We use cookies on our website to give you the most relevant experience by remembering your preferences and repeat visits. By clicking “Accept”, you consent to the use of ALL the cookies. However you may visit Cookie Settings to provide a controlled consent.
Cookie settingsACCEPT
Manage consent

Performance cookies are used to understand and analyze the key performance indexes of the website which helps in delivering a better user experience for the visitors.

Analytical cookies are used to understand how visitors interact with the website. These cookies help provide information on metrics the number of visitors, bounce rate, traffic source, etc.

Advertisement cookies are used to provide visitors with relevant ads and marketing campaigns. These cookies track visitors across websites and collect information to provide customized ads.

Other uncategorized cookies are those that are being analyzed and have not been classified into a category as yet.